Our main October film will be Song for Marion, featuring Terrance Stamp and Vanessa Redgrave in a funny but heartfelt story of a grumpy curmudgeon who is forced by his terminally ill wife to join a local singing group, but ends up finding friendship and support.

USA Today said "The movie works because of the artistry of its stellar cast and heartfelt script by writer-director Paul Andrew Williams" while the New York Post said "Stamp could not be better as a man set emotionally adrift when he loses the love of his life." 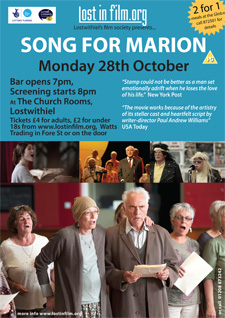