Our January film will be The Angels' Share, a bitter sweet comedy set in Glasgow about an ex-offender who discovers the "water of life" could be his saving grace.

Robbie escapes a prison sentence by the skin of his teeth just as his girlfriend is about to give birth to their first child. During community service he discovers an unlikely group of no-hope friends and a surprising taste for malt whisky. With the odds stacked against them, could Robbie's new found talent change all of their lives?

The Daily Telegraph said "This is British comedy at its warmest and most pleasurable; cask strength, unfiltered and neat." while Hollywood Reporter said "There is love, laughter and whisky galore in Ken Loach's unusually joyful comedy drama."

The Angels' Share will be shown on Monday 28th January, at the Church Rooms, Church Lane, Lostwithiel. Doors and bar open 7pm, film at 8pm. Tickets cost £4 for adults and £2 for under 18s, and are available online now or in advance from Watts Trading or on the door if not already sold out. 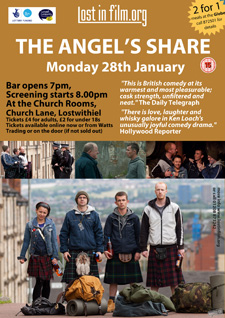