Our June film will be The Artist, the silent movie which has swept the boards at award ceremonies. This year's best movie?

In 1927, silent movie star George Valentin is at the peak of his career. Then he meets aspiring actress Peppy Miller and the talking pictures arrive, and life will never be the same. A crowd-pleasing tribute to the magic of silent cinema, The Artist is a clever, joyous film with delightful performances and visual style to spare.

Please note: The Artist is a silent movie with a musical soundtrack and title cards.

USA Today said "In a time when movies often are sonic assaults, and meaning can be lost amid the clatter of explosions, gunshots and screeching cars, The Artist has an utterly beguiling purity." while Lost Angeles Times said "The Artist is the wonder of the age, as much a miracle as Avatar, though it comes at things from the totally opposite direction."

The Artist will be shown on Monday 25th June, at the Church Rooms, Church Lane, Lostwithiel. Doors and bar open 7pm, film at 8pm. Tickets cost £4 for adults and £2 for under 18s, and are available online now or in advance from Watts Trading or on the door if not already sold out. 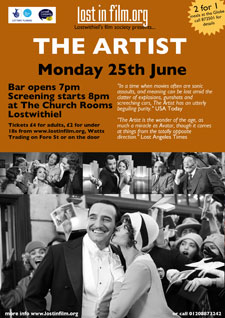