Our January film was The Boat That Rocked. With a roll-call of stellar names and a fantastic soundtrack, the film tells the story of the pirate radio station whose music united and defined an entire generation and drove the British government crazy.

Directed by Richard Curtis the film stars Billy Nighy, Philip Seymour Hoffman, Kenneth Branagh, Rhys Ifans, and Nick Frost to name but a few and features an unbelievable selection of music including The Beatles, The Stones, Beach Boys, Dusty Springfield, The Who and Jimi Hendrix. The film is laugh out loud funny and speaks to the rock n roll rebel in all of us.

Sunday Mail said "Sensational stuff from one of the best writers of his generation and a film which appeals to every age". Digital Spy said "It's a delight to be in the company of this crew, so much so that you'll be tempted to book a roundtrip." Uncut Magazine said "Bill Nighy is superb".

The Boat That Rocked was shown on Monday 25th January, at the Church Rooms, Church Lane, Lostwithiel. 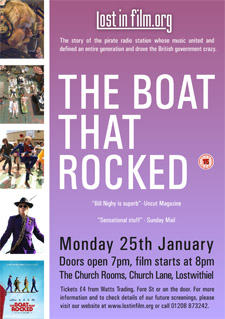