The boy in the striped pyjamas (12A)

Our April film was The boy in the striped pyjamas. Set during World War II, it's a story seen through the innocent eyes of Bruno, the eight-year-old son of the commandant at a concentration camp, whose forbidden friendship with a Jewish boy on the other side of the camp fence has startling and unexpected consequences.

The Times said "it is one of the most moving and remarkable films about childhood", Rolling Stone said "the power of this Holocaust tale sneaks up and floors you".

The boy in the striped pyjamas was shown on Monday 27th April, at the Church Rooms, Church Lane, Lostwithiel. Doors and the bar opened at 7pm and the film screening started at 8pm. 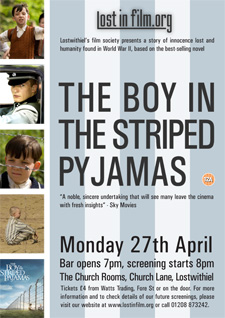