October's film was The Darjeeling Limited (Cert 15).  Starring Owen Wilson, Adrien Brody and Jason Schwartzman, this is an emotional comedy about three brothers re-forging family bonds. Directed by Wes Anderson, the creator of RUSHMORE and THE ROYAL TENENBAUMS, Rolling Stone said, "I love this movie - one of the best of the year" and Total Film called it "Funny, smart and poignant...".

The Darjeeling Limited was shown on Monday 27th October, at the Church Rooms, Church Lane, Lostwithiel. 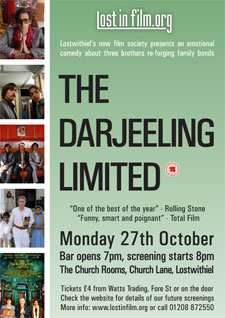