Our February film will be The Fighter, the Oscar-nominated true story of boxer Micky Ward's unlikely road to a world title.

Managed by his mother, Alice, and trained by his half-brother Dicky (the original boxing "Pride of Lowell" but now an unreliable drug addict), Micky's career is grinding to a halt. Micky is forced to admit that his family might not have his best interests at heart. With the support of his girlfriend and father he makes one last attempt at the world title.

The Fighter will be shown on 27th February, at the Church Rooms, Church Lane, Lostwithiel. Doors and bar open 7pm, film at 8pm. Tickets cost £4 for adults and £2 for under 18s, and are available online now or in advance from Watts Trading or on the door if not already sold out. 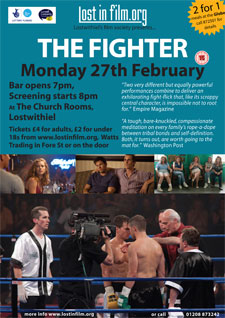