Our May film will be The Ides of March, a drama about idealism and dirty politics on the campaign trail for a new presidential candidate.

The film takes place during the frantic last days before a heavily contested Ohio presidential primary, when an up-and-coming campaign press secretary finds himself involved in a political scandal that threatens to upend his candidate's shot at the presidency.

A timely film for the current US presidential elections, it is also a study on the classic themes of power, loyalty and betrayal. Directed by George Clooney and starring acting heavyweights Philip Seymour Hoffman, Paul Giamatti and Ryan Gosling, the new hot ticket in Hollywood.

Rolling Stone said "The Ides of March is a pulse-racing thriller that hits where it hurts. Clooney's performance is exceptional and Gosling is terrific in an all-stops-out role" while OK! said "Yet another fantastic performance from Ryan Gosling, in what has turned out to be his breakout year that elevates him to the top rank of actors."

The Ides of March will be shown on 28th May, at the Church Rooms, Church Lane, Lostwithiel. Doors and bar open 7pm, film at 8pm. Tickets cost £4 for adults and £2 for under 18s, and are available online now or in advance from Watts Trading or on the door if not already sold out. 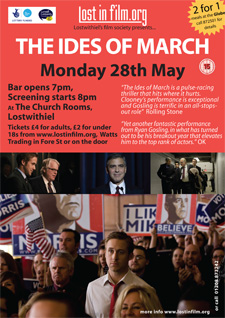