As part of our 5th birthday celebrations this is a FREE screening!

Our November Screen 2 film will be The Sessions, Based on the poignantly optimistic writings of journalist and poet Mark O'Brien, the story of a man confined to an iron lung who is determined at age 38 to lose his virginity. With the help of his therapists and the guidance of his priest, he sets out to make his dream a reality.

Warning: extensive (but tasteful!) nudity and frank talk about sex.

The Financial Times said "Hunt is a prodigy. No other actress could have brought such easeful transparency, such a glow of givingness, such heedlessness of glamour each time she strips naked." while Time Out said of the director: "Lewin, who has fought his own lifelong polio battle, handles tricky material with a gentle, empathetic touch."

Tickets are FREE and are available online now or in advance from Watts Trading or on the door if not already taken. 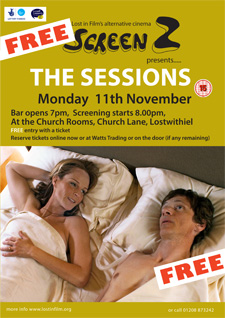