Our February Screen 2 will be the remake of French classic The Well Digger's Daughter, set in beautiful, sun-drenched Provence at the start of World War II.

Please note: the film is in French with English subtitles.

The Well Digger's Daughter comes from the same stable as Jean de Florette and Manon des Sources, written by the same author, Marcel Pagnol, and directed by Daniel Auteuil who rose to fame in those films. Auteuil stars as a father torn between his sense of honour and his love for his daughter when she gets in trouble with the wealthy son of a shopkeeper.

The Guardian describes it as a "handsome, old-fashioned film" while Time Out enjoyed the "broad appeal... from its antiquated charm, modest focus and a clutch of ripe, old-school character turns".

The Well Digger's Daughter will be shown on Monday 11th February, at the Church Rooms, Church Lane, Lostwithiel. Doors and bar open 7pm, film at 8pm. Tickets cost £4 for adults and £2 for under 18s, and are available online now or in advance from Watts Trading or on the door if not already sold out. 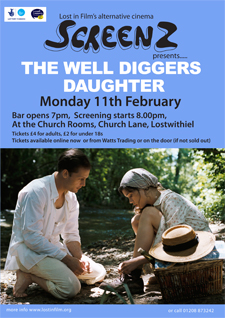