Our November film will be The Woman in Black, the screen adaptation by Hammer Films of the classic ghost story and long-running stage show, starring Daniel Radcliffe.

In Edwardian times a widowed young lawyer, Arthur Kipps, travels to a remote village to gather paperwork about an abandoned property. The locals are hostile and obstructive and Arthur soon discovers the reason is that the vengeful ghost of a scorned woman has been terrorizing them.

Empire Magazine said "Check behind the doors. Switch on all the lights. You won't be sleeping soundly for a while." while New Yorker describes how "The moody, beautifully composed production raises it above the norm."

The Woman in Black will be shown on November 26th, at the Church Rooms, Church Lane, Lostwithiel. Doors and bar open 7pm, film at 8pm. Tickets cost £4 for adults and £2 for under 18s, and are available online now or in advance from Watts Trading or on the door if not already sold out. 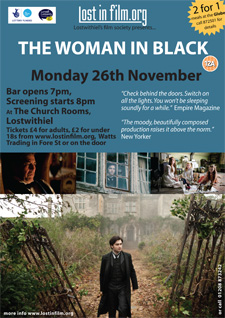