The Imitation Game (12A)

Our June main film to finish this season will be The Imitation Game...

Based on the real life story of legendary cryptanalyst Alan Turing, the film portrays the nail-biting race against time by Turing and his brilliant team of code-breakers at Britain's top-secret Government Code and Cypher School at Bletchley Park, during the darkest days of World War II.

'Near perfect, and damn entertaining with moments of thrills, triumph, and sadness...'  Elias Sevada, Film Threat 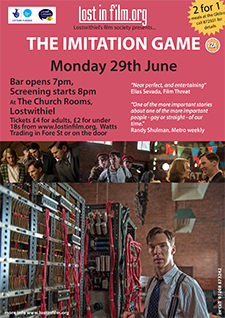