Our October main film will be The Railway Man...

An epic true story a British Army officer who is tormented as a prisoner of war at a Japanese labor camp during World War II. Decades later, he discovers the Japanese interpreter responsible for his treatment is still alive and sets out to confront him, and his haunting past, in this powerful and inspiring tale of heroism, humanity and the redeeming power of love.

'The truth of what happened to him is devastating; the truth of how he found forgiveness in his soul is astonishing.' Seattle Times 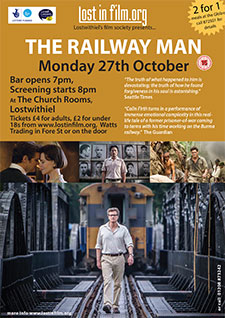