Our September film will be True Grit, the Coen brothers adaptation of the Charles Portis novel which has been hailed as an all-time classic Western. Better than the 1969 John Wayne's Oscar winning version? You tell us!

Following the murder of her father by hired hand Tom Chaney, 14 year old farm girl Mattie Ross sets out to capture the killer. She hires the toughest US marshal she can find, Rooster Cogburn (Jeff Bridges). Against his wishes, she joins him on a trek into the Indian Nations in search of Chaney, joined by Texas Ranger LaBoeuf (Matt Damon). The unlikely trio find danger and surprises on the journey, and each has his or her "grit" tested.

The Daily Express said "this masterful, touching, and hugely entertaining picture is a rousing depiction of manly leadership and moral certitude set in a world unencumbered by political correctness" while Film4 described it as "solid, classy entertainment with something for practically everyone, from casual film fans to Coen brothers obsessives".

True Grit will be shown on Monday 26th September, at the Church Rooms, Church Lane, Lostwithiel. Doors and bar open 7pm, film at 8pm. Tickets cost £4 for adults and £2 for under 18s, and are available online now or in advance from Watts Trading or on the door if not already sold out. 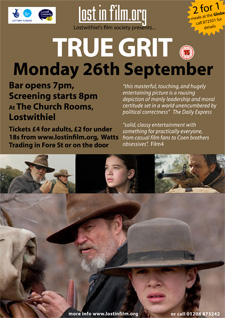