Our April Screen 2 film will be Untouchable, the irreverent but uplifiting true story of a wheelchair bound man and his unlikely carer.

Breaking box office records in France and across the world, Untouchable tells the story of the friendship between a millionaire who became quadriplegic following a paragliding accident and his street-smart ex-con caretaker. An unlikely camaraderie forms, rooted in the honest and humorous way the two men treat each other.

The Guardian said "For once, the hype is justified" while Time Out said "It delivers broad laughs and tugs at the heartstrings without delving too deep - the very definition of a crowd-pleaser."

Untouchable will be shown on Monday 8th April, at the Church Rooms, Church Lane, Lostwithiel. Doors and bar open 7pm, film at 8pm. Tickets cost £4 for adults and £2 for under 18s, and are available online now or in advance from Watts Trading or on the door if not already sold out. 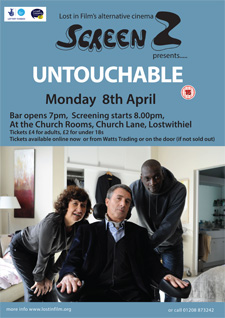