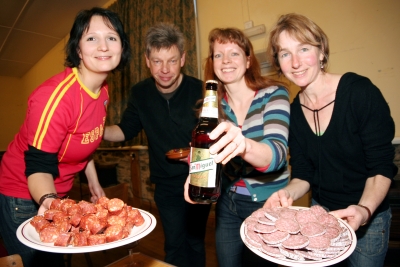 Our March film was Vicky Cristina Barcelona, a return to form for Woody Allen with this beguiling tragicomedy which charms with beautiful views of Barcelona and a well-matched cast. It was a Spanish themed evening with a choice of tapas, Spanish beer and wine available from the bar, which was open at 7pm.

Two young Americans spend a summer in Spain and meet a flamboyant artist (Javier Bardem) and his beautiful but insane ex-wife (Penelope Cruz, in a role which earned her a Best Supporting Actress Oscar and Bafta). Vicky (Rebecca Hall) is straight-laced and about to be married whilst Cristina (Scarlett Johansson) is a sexually adventurous free spirit. When they all become amorously entangled, the results are both hilarious and harrowing.

Vicky Cristina Barcelona was shown on Monday 29th March, at the Church Rooms, Church Lane, Lostwithiel. Tickets cost £4 and were available in advance from Watts Trading or on the door if not already sold out.