Our June Screen 2 film will be Wadjda...

Wadjda is an 11 year old Saudi girl who signs up for a Koran recitation competition to raise enough money to buy a green bicycle that she's set her heart on, much to the disapproval of her mother and school friends.

Wadjda is the first feature film to be shot entirely in Saudi Arabia and the first feature-length film by a female Saudi director, two important milestones in a country where cinemas are currently banned.

"The most radical and cheering message of Wadjda is that a change isn't just possible, but inevitable." Washington Post

"Wadjda captures Saudi life on the cusp of serious change, but it's by no means a solemn drama. Al-Mansour writes and directs with a light touch and hopeful aspect." Toronot Star 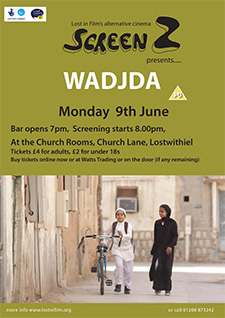