Our October Screen 2 film will be We Need to Talk About Kevin, the stylish and shocking film about the troubled relationship between a mother and son which escalates to a terrible crime.

Right from his birth, Eva struggled to love her son Kevin. Through flashbacks we learn that as he grew older his behaviour towards his mother became more challenging and vicious, while to everyone else he seemed normal and pleasant. Eva agonises over how much she was to blame for his nature, and for the final act of brutality for which he is now imprisoned.

Rolling Stone said "acting doesn't get much better than the subtly brilliant display put on by Tilda Swinton in We Need to Talk About Kevin" while Los Angeles Times described it as "a disturbing tale told with uncompromising emotionality and great skill by filmmaker Lynne Ramsay."

We Need to Talk About Kevin will be shown on Monday 8th October, at the Church Rooms, Church Lane, Lostwithiel. Doors and bar open 7pm, film at 8pm. Tickets cost £4 for adults and £2 for under 18s, and are available online now or in advance from Watts Trading or on the door if not already sold out. 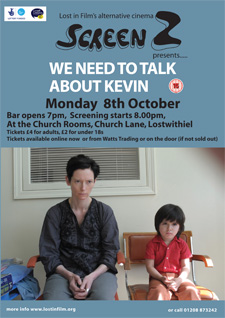