Our May film will be Whatever Works, a romantic comedy marking Woody Allen's return to Manhattan-based films and featuring a central character which bears more than a passing resemblance to the director.

Lifelong resident Boris Yellnikoff has strong opinions about life, love and existence, and shares them with anyone within earshot. When he begrudgingly allows a naive Mississippi runaway called Melodie St. Ann Celestine to live in his apartment, he forms an unlikely friendship which becomes further complicated when Melodie's parents eventually track her down.

Time Out said that "Whatever Works is rooted in an agreeable sensibility: life favours fate over luck more than we'd like to think, so grab whatever chances of happiness come your way" while Variety described it as "stuffed with witty one-liners and wondrously convoluted tirades".

Whatever Works will be shown on 30th May, at the Church Rooms, Church Lane, Lostwithiel. Tickets cost £4 for adults and £2 for under 18s, and are available online now or in advance from Watts Trading or on the door if not already sold out. 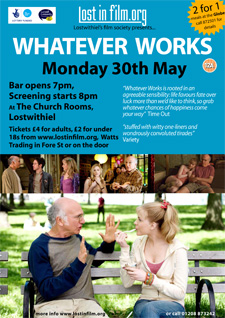