Our November film will be Winter's Bone, the Oscar nominated film about a young girl's struggle to keep her family together.

With an absent father involved the in local drug trade and a withdrawn and depressed mother, 17-year-old Ree Dolly is responsible for looking after her younger brother and sister in the dirt poor rural Ozark mountains. When her father skips bail their family home is at risk of being repossesed. Ree is met with a conspiracy of silence which she must confrront to keep her family togeher.

Time Out said "Granik balances the pace and intrigue of a mystery thriller with total compassion for Ree, played with much skill by Lawrence." while the Guardian said the film is "given unironic dignity and power due to the outstanding lead performance from 20-year-old Jennifer Lawrence as Ree".

Winter's Bone will be shown on 28th November, at the Church Rooms, Church Lane, Lostwithiel. Doors and bar open 7pm, film at 8pm. Tickets cost £4 for adults and £2 for under 18s, and are available online now or in advance from Watts Trading or on the door if not already sold out. 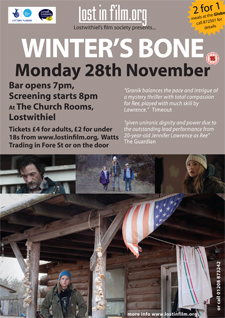